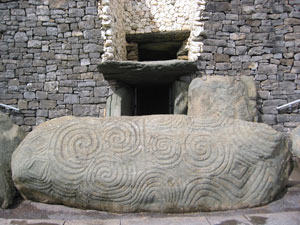 Well, of course the Irish love to celebrate the New Year.

The ancient celtic new year is, of course, in October and is called samhain. Samhain is, actually, the original Halloween and is now celebrated worldwide, but its significance as the start of the New Year has been entirely lost.

The December 31 New Year’s Eve night celebrations in Ireland is almost indistinguishable from the states. You know the drill: there are lavish parties and a count-down to midnight and then everyone kisses and sings Robert Burn’s Auld Lange Syne.

There are, however, some wonderfully unique Irish new year celebrations.

The most famous of these has to be Newgrange, which has been faithfully recording the exact moment of the winter solstice in an astonishing stone chamber built before Egypt’s pyramids (500 years earlier, actually – c.3300 B.C.). For 17 minutes each year on the exact moment of the winter solstice, a solid shaft of sunlight penetrates Newgrange’s inner chamber perfectly and has been doing so for 5,000 years. Wow. Of course, this doesn’t happen on December 31 very often.

For the last sunset of the year in Europe, you can head up to Achill Island where their New Year’s Eve celebrations are supposed to be quite something. Among the festivities is a parade with pipers at midnight and a traditional morning swim in the frigid Atlantic Ocean.

There is a group that holds a hippified Shamanistic celebration as well, if you’re into fire walking and trance music until dawn.

Otherwise, most cities in Ireland have street parties and fireworks. It’s never a bad thing to party with the Irish, no matter where you are.