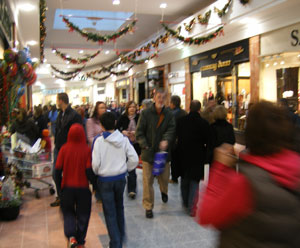 So if you’re anything like me, it’s December the 23rd and you still haven’t finished your Christmas shopping.

As bad as this is, it’s not nearly so awful as the repercussions – venturing out among the Irish shopping masses to locate the last few tidbits necessary for the holiday.

This is one aspect of Ireland that varies imperceptibly from the states – everyone is out there doing their last-minute shopping. I’m pleased to report that, at least here in Athlone, there seems to be a much calmer feeling to the bustle. In the states, shoppers faces would likely be a sea of frowns and there would be various fracas in the aisles as folks fought over some last particular desired item.

Not only did I catch employees at the local shopping centre singing Christmas carols, but I caught cashiers at the supermarket joking amongst each other. When I arrived at the poultry section to purchase a duck I discovered there were none left. The butcher happened to be there and pointed me toward some half-ducklings. When I frowned, realising the half-duckling could make stuffing the bird difficult, the butcher smiled at me, “I’ll mark those down for you, for the inconvenience,” he said.

It would seem the Christmas spirit is alive in well in Ireland.