Irish minister warns students not to drink too much 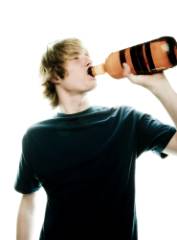 Today the results for the Junior certs were released. The Minister for Education, Mary Hanafin, issued a warning hand-in-hand with her congratulations, stating that students, “must avoid the ‘disgraceful’ behaviour of previous years”. Not only does she go on to mention alchohol consumption, but the press has twinned her comments with warnings from Alchohol Action and MEAS (Mature Enjoyment of Alchohol in Society). IOL did it in the 3rd sentence. RTE waits until the end of their article. Health Ireland published it with a large picture (on your left, there) of a young man drinking a huge bottle of . . . what is that, cider?

Hang on a minute – JUNIOR certs?

That means these kids are between 14-16 years of age. Aside from a few prison inmates and elderly adults seeking an education they never had the opportunity to get, the subject of the minister’s warning are ALL undage. These kids shouldn’t have access to alchohol in the first place. Her announcement twining accolades with alchohol tacitly states that underage drinking is expected. Yes indeed folks, keep the eyes peeled for those newbies down the pub this evening, puking in the throes of their first experiments with drink.

It may be a stretch, but I think the acknowledgement from the Minister of Education is almost an endorsement of underage drinking. By saying it’s expected of them, she’s acknowledging that it’s the norm. If you were (or are) a teenager and you heard that all your friends were going drinking, wouldn’t you? Nevermind peer pressure, the media made me do it!

I think that pretty much says it all.