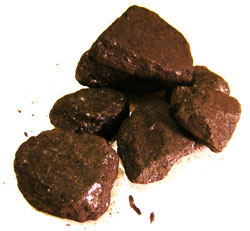 The first was traditional, hand-cut turf.
The second was machine-processed turf briquettes.
The third is coal.

If you’re anything like me, the closest you’ve ever come to coal is images from the movies and the bizarre threat that you might end up with a lump of it in your Christmas stocking.

Allow me to confirm a few rumours. It’s black as hell and dirty as heck. Pregnant women and small babies are, if it’s within reach, likely to be found bizarrely sucking on the stuff. It also burns really well.

Illegal in most parts of the world (at least as far as home use is concerned), coal can be found throughout Ireland at petrol stations and fuel depots. It burns hotter than turf, lights more easily and weighs an awful lot more. A 40kg bag of coal can, if lifted wrongly, throw your back out. Lifting a piece of coal is like lifting a heavy rock. It can also crack open explosively when burning, so watch where you stick them big lumps of coal in your fire.

Like turf, coal is banned from urban fireplaces in Ireland, but most Irish households still burn the stuff. I don’t believe that Ireland has any natural coal deposits, most of the bags I’ve seen here are of Polish origin. Irish people tend to use coal in conjuction with briquettes and turf, as coal burns better but tends to cost a lot more and be more awkward to use.