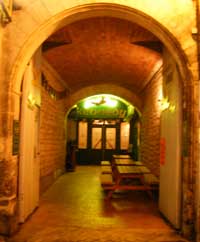 Well, I’ve just returned from 10 days abroad in France. It’s a good place, and you should definately (after Ireland, of course) consider a trip to France. The Paris Logue should definately be your first step in planning such an endeavor.

In any case, while sampling foie gras and practicing the pronunciation of such places as Angouleme we met up with The Grumpy Frenchman and pondered the oddities of Irishness abroad.

As anyone can tell you, the Irish export their identity. It’s a commodity. What modern town doesn’t have an “Irish” pub? Irishness in France is much the same. Take this place, for example. Even though the decor was done well – appropriate bits of “irishness” scattered about – the intersection with French culture was readily apparent. 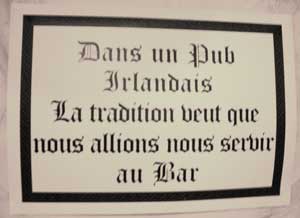 Also, if you thought Ireland was expensive – good fecking lord above us, the price of a pint in France!!!! I paid €6.20 for my pint of Guinness in this pub!

I suppose it has to be said that I paid €8 in Paris a few years ago. I also once paid $10 in Ho Chi Minh city for two cans of extra stout poured into a glass. A friend of mine claims to have paid $12 in Korea for a pint as well. But hey, that’s Asia – France is just across the pond!

Also, the music is missing. I suppose without the Irish and their instruments, you can’t really have an Irish session, so what are these foreign Irish pubs to do? I suppose you hang up some Guinness signs, use an old calligraphy font on your shopfront and hope for the best.

Really, it’s the Field of Dreams scenario as far as finding the craic is concerned: if you build it, they will come.