This weekend is the Ryder Cup; the biggest event in a sport invented a stone’s throw from Ireland. I suppose it makes sense, Ireland presents an ideal environment for it – gently rippling landscape covered with perpetually green grass. There are at least five golf courses that I’m aware of just here in Athlone.

The thing is, when you combine Irish hospitality with golf you sometimes get strange results. President Clinton, for example, stopped into the small village of Ballybunion in County Clare to play a round of golf.

They built him a statue.

There he is, in all his glory, perpetually swinging a golf club in front of the Ballybunion garda station. It happens to be, as far as I know, the only existing statue of President Clinton in the world. 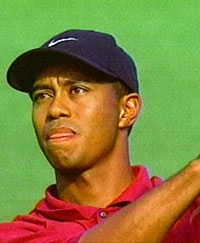 The displayed picture was a photoshopped image of the head of Tiger Woods’ wife carefully imposed onto a a pornographic image (with the naughty bits blacked out, of course).

For feck’s sake. Obviously, Tiger wasn’t impressed. The magazine later issued an apology, but accompanied it by saying that the article was meant as a parody of tabloids and they didn’t have any reason to expect any legal action to be made against them.

Sure, why should they? It’s all a bit of fun, making damaging accusations in public about someone’s wife. Maybe this is the real shame about modern Ireland – this once pastoral society concerned with hospitality and self-effacing humour is now being flushed with success and losing a grip on its mores, its humility and, most tragically, its once apt sense of humour.