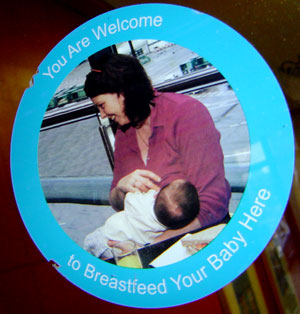 I recently posted about breastfeeding in Ireland.

I spotted the sticker there on the left at the local McDonalds. Whoever runs the Irish McDonalds spends a lot of time “Irish-izing” their marketing campaigns.

There are a lot of businesses lifted from the UK and placed in Ireland with their British-tinged advertising and marketing strategies intact. Ireland is a comparitively small market and possibly those advertising execs figure that because Paddy speaks english and watches a lot of BBC, there’s no need to alter their pitch for the Irish audience.

For better or worse, this is definately not the case with McDonalds. Their radio ads, etc are always distinctly Irish. This sticker is further evidence: the Irish government is currently running a vigorous pro-breastfeeding campaign onto a population with the lowest breastfeeding rate in europe. It’s in the news, it’s everywhere. Despite the government’s efforts, there is still a certain cultural resistance to breastfeeding. This resistance is part of the older Irish mentality often scorned by the younger Irish generation who would be having babies and listening to the government’s breastfeeding message. Statistics show that that younger generation (under 30s) is over half of Ireland’s population – that’s a large market.

By declaring their restaurant as an area friendly to breastfeeding, McDonalds is declaring itself philosophically in line with the new, modern Ireland and expanding its appeal to the largest Irish demographic. While I applaud the sentiment of the sticker, its flagrant abuse as a tool for marketing fast food offends me.

Or am I just too cynical?

Maybe some independant group approached McDonalds and put the sticker on their door? There are no McDonalds’ logos on it . . . perhaps it is independent? But then why haven’t I seen this sticker anywhere else in town?

Sometimes I seriously question my own sanity – who reacts this way to a sticker in a McDonalds?