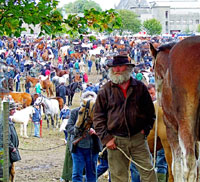 The 2006 Ballinasloe horse fair ended Sunday with the dramatic annual tug-of-war competitions filling the weekend. The streets are blocked off for the evening and local businesses and groups compete against each other under the streetlamps to the cheering of the crowds.
Personally, my weekend was chock-a-block; hardly was I back from Kinsale but I was in doing sound for the Bill Coleman concert, leaving Sunday to be a well-deserved day of rest (with a few tunes down in Sean’s Bar, or course).
Supposedly the fair broke records this year, with the largest crowds attending in recent history. Fireworks were held down at the Ballinasloe marina Friday night. Saturday was an open fair day with market stalls filling the aptly named Market Square and the evening descended into a massive ceili with the Kilfenora Ceili band.
On Sunday the French market set themselves up and a dog show was held in St. Michael’s square. I heard from attending friends that it was a fantastic weekend.
Heck, it’s the oldest horse fair in Europe – I’ll have to see if I can make it next year myself. 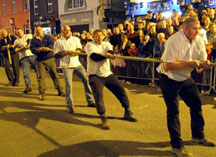