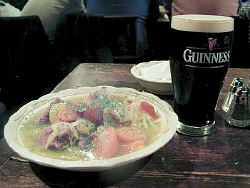 When you think of Irish food, you may not get beyond the legendary potato famine before you start drifting into boredom. If other things come to mind, it will likely be fish and chips and the ever-present pint of Guinness. But even if you are not a serious foodie, you will be pleased to know that Irish food has come a long way since the days of the potato famine, and these days Irish cuisine does not have to be an oxymoron.

Food in Ireland comes in two general forms – traditional and modern. The traditional Irish food is what we most often think of, and it is the stuff you are likely to find on pub menus and simpler restaurants. Slightly dressed-up versions of simple dishes (with the accompanying higher prices) are also easily found in touristy eateries. Traditional Irish dishes include:

Seafood is also common in Irish cooking – Ireland is an island, after all. Salmon and cod are used quite frequently, and some shellfish are also becoming popular. Prawns are popular in Dublin, and Galway has an oyster festival each year.

Modern Irish cuisine is making a name for itself more recently, as young Irish chefs are taking old Irish ingredients and presenting them in new ways. Even hard-core foodies will find a restaurant or two worth raving about (especially in Dublin). The only problem is that the prices on these more modern restaurants are much higher than their traditional counterparts – in fact, prices tend to be higher than the prices in similar restaurants in other European capitals. So if you are intent on having at least one nice meal in a modern Irish restaurant, be sure to save a little extra to pay for it.

County Cork, and in particular the town of Kinsale, is gaining a reputation these days as the culinary capital of Ireland. Serious foodies should head directly for Kinsale – do not pass go, do not collect $200.

There are lots of food-related festivals throughout Ireland, and if you find yourself in the area during a festival it is a great way to spend your time. From the Galway oyster festival to the fabulous Kinsale food festival, celebrating what is on the menu in Ireland is always fun.

Irish Drinks
Irish food is not the only thing on the menu in Irish restaurants, and many people would argue it is the stuff in the glass that is more important. We are talking, of course, about Ireland’s famous beverages.

Guinness is known the world over for its impenetrable blackness, and this Dublin-brewed beverage is certainly something worth trying when you are in Ireland – but it is not the only stout in the country. Other brands you will see are Murphy’s and Beamish, both of which are brewed in Cork. Stout is so popular in Ireland that there are also small micro-breweries which turn out small quantities of the stuff.

In addition to stout, you will also find ales and ciders on tap at most Irish pubs, including Smithwick’s Ale and Bulmer’s Cider. If you are unfamiliar with Irish beers, be sure to ask your bartender what is recommended.

Irish whiskey is also popular throughout Ireland, and comes in many forms – including single malt, single grain and blended whiskey. True whiskey connoisseurs can make whiskey the focus of a trip to Ireland, visiting distillery after distillery and making their own whiskey trail.

For more about Irish food, check out all the restaurants that have been reviewed here!