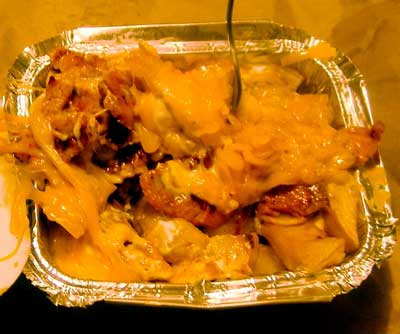 The new Genoa cafe got me to thinking. There is now a noble little chinese place across from the Athlone Garda station called “Lotus Chinese,” but there used to be a chipper there called Fryer Tuck’s (hah hah) whose specialty was Garlic curry cheese and bacon chips.

That’s right – thick-cut, deep-fried chips smothered in both a heavy garlic cream and yellow curry sauce (both, no doubt, cream-based), huge chunks of Irish bacon (rashers, really – they resemble ham steaks more than the crispy bacon we’re used to stateside) all under an oozing, melting blanket of Irish cheddar cheese.

I do believe my aorta almost clogged shut just during that description.

I mentioned this bee-yoo-tee-ful concoction in my post about the etiquette of drinking in Ireland, but since Fryer Tucks closed for the past few years I have not seen that particular combination advertised at any chipper and, frankly, had mostly forgotten about it. 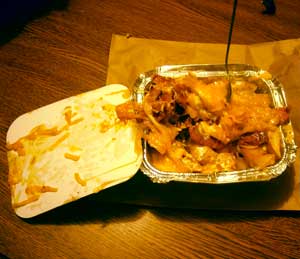 Well, following this Tuesday’s Shack session the bean, the sherrif and I were heading home when the Irish munchies struck. Well, we nosed up to the kerb at Alfredos and tromped in. I made mention of the lost garlic curry cheese and bacon chips and the bean said,

I did get a revolted look from the girl behind the counter and had to confirm twice that yes, I wanted ALL THOSE TOPPINGS on my small order of chips (now there – what was I at ordering a SMALL chips with so many toppings on it?), but make them they did.

And, I’m disgusted with myself to say, they were every bit as good as I remember.

Read more about Irish food before your trip!