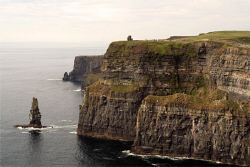 Planning a trip to Ireland is going to be as difficult and time-consuming as you want it to be. There are people at all points along the traveler spectrum, from those who plan every day down to the last minute to make sure they do not miss a thing to those who plan nothing and are prepared to go with the flow to make sure they do not miss a thing. It is a little bit of a joke, yes, but the bottom line is that although you will certainly meet people who will tell you one way of traveling is better than another, you will need to follow your gut and travel the way that feels best to you – though we would advise that you leave a little wiggle room in your itinerary for the unexpected!

Make Lists
If you are a list-making type, this is a very good place to start. Write down the places you want to make sure you visit during your trip to Ireland, and then prioritize it. This way, you can start getting a feel for what you will have time for and what you will not – at some point as you move down your priority list you will have to draw a line. And it can be better to know that in advance than to be sorely disappointed when you are in Ireland and only then realize that you do not have enough time for everything you want to do.

If you can plan on returning to Ireland at some point for a future trip, you can take on a more leisurely attitude toward list-making and just go with whatever happens. These are often the best kinds of trips, when you end up stumbling upon a local festival or walking into a weekly music session at the local pub, and they are decidedly unstructured. These free-flowing journeys suit people who feel hemmed in by schedules, and annoy those who live by their calendars. Both types of people (and all in between) can enjoy a trip to Ireland, of course, so long as they are taking their own kind of trip and not someone else’s idea of the best kind of trip.

Airfare to Ireland
Obviously, your first hurdle when planning a trip to Ireland will be getting there – no matter what kind of traveler you are! Airline tickets to the Emerald Isle can be quite expensive if you are not flying from within Europe, so you would do well to learn the ways to save money on your airfare to Ireland. One thing to look into, especially if you have more time than money to spend on your trip, is whether flying into a different city would be cheaper from where you live. For instance, those in the New York area are often blessed with extremely cheap ticket offers to cities like London or Paris. If you find such a deal, your next step is to calculate how much a short hop flight from that point to Dublin (or any other city in Ireland) would be, and whether that combination of two separate tickets would be cheaper than buying a round-trip ticket directly to Ireland.

Travel in Ireland
There are several choices for getting around Ireland. You can rent a car (remember that in Ireland you must drive on the left-hand side of the road!), take the train around the country, and travel by bus either in the cities or from town to town. Driving gives you the most freedom and flexibility, obviously, but renting your own car can be expensive unless you have a group with which you can share the costs. Train travel in Ireland is almost all run through Dublin, making some journeys quite easy and others extraordinarily difficult and out of the way. For some trips between towns that are not near Dublin, taking the bus is the better choice.

Depending on the amount of money you have on hand to spend, you can even fly from city to city if you like, as there are many airports located throughout Ireland – even in some very small communities. Other modes of transport include boats (there are several places where you can get from Point A to Point B entirely on the water) and bicycles (cycling is popular throughout the country, in any weather). It should also be mentioned that hitch-hiking is not only allowed in Ireland, it is quite common. You will probably need to get away from the city center in order to do it, but if you are up for it (and willing to walk if you do not get a ride!) it can be a fun way to see the countryside and meet some interesting people!