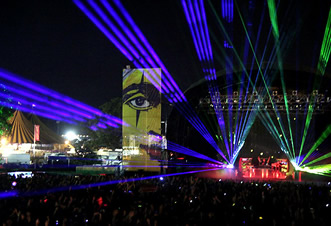 The Electric Picnic music festival in Stradbally, Ireland has made the TimesOnline‘s list of “Europe’s 20 best summer music festivals,” so we thought we’d take a moment to tell you about the festival in case you decide you want to go!

The article describes Electric Picnic as “Ireland’s boutique festival,” partly because it takes place on the 600-acre Stradballey Hall Estate outside Dublin. But additionally, the festival attracts an incredible lineup each year of musical acts that you’ve not only heard of, but that you’d actually be happy to pay money to see.

For Electric Picnic 2008, which runs from August 29-31, the musical lineup includes the Sex Pistols, Sinead O’Connor, Sigur Ros, My Bloody Valentine, Underworld, George Clinton and the P-Funk Allstars, Turin Brakes, The Breeders, Goldfrapp, Henry Rollins, Wilco, Duffy, The Roots, The Gossip and Franz Ferdinand. Electric Picnic also features a comedy element, as well as theatre, cinema, and spoken word performances. And with parts of the festival even focusing on the kids, there’s really something for everyone.

If you want to buy a pass for the whole weekend, it’s going to cost you €240 – and there aren’t any single-day passes, so there’s no discount just for seeing one day’s worth of bands. This ticket includes a camping fee, so if you want to stay on the festival grounds and pitch your tent you’ve already paid for it! Of course, if you’d rather stay in a Dublin hostel or hotel in Dublin, there are plenty to choose from and the trip to Stradbally is less than an hour each way.

Family groups can get camping passes that will get you into the festival and sleep in one of the designated family campsites, that pass is €480 and covers two adults and as many as four kids under the age of 12. Don’t let those prices keep you away, however, because Electric Picnic – in addition to being a great music festival – is also a fundraiser for local charities.

So, for those of you who are still planning your summer travels and you’d like to combine a bit of music with your sight-seeing, be sure to check out the Electric Picnic music festival in Stradbally – score some cheap tickets to Dublin, pitch a tent on the Stradbally lawn and you’re ready for the music to start!

Find out more about Electric Picnic at the festival website.