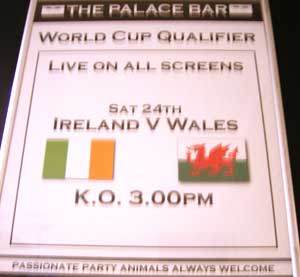 It was an epic match in one sense. Croke Park, the GAA’s hallowed ground of Irish sport opened her doors to soccer for the first time in her history.

On the other hand, in his post-game commentary, Eamonn Dunphy declared it the second worst game the Irish soccer team has played in its history.

The short of it is that a World Cup qualifier match was played today between Ireland and Wales wherein Ireland came out on top with a 1-0 victory. That’s about the most positive aspect of the match. It used to be, back in 2002, that Ireland was a serious competitor on the world stage. The friend I watched the match with is a sports writer from Mayo and told me that he was recently asked what he though about Ireland being the laughingstock of European soccer.

“On the contrary,” he replied at the time, “we’re not the laughingstock . . . we’re actually completely ignored by the rest of Europe at this point.”

Oh, folks. It’s rare after one’s team has come away with a victory that one feels let down. Not that I envy Wales, mind you, but at this point I hold very little hope for Ireland to emerge as one of the World Cup contenders.