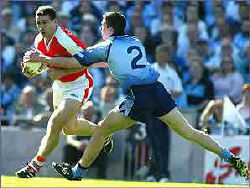 Sports in Ireland are extremely popular, both in terms of playing them and watching them. The most popular sports in Ireland are listed below, with a little information about each. While you are in Ireland, if you are a sports fan, catching a live match of any of the country’s most watched sporting events can be a great way to get to know the culture and have a memorable time. Alternately, if there is an important match being televised, find yourself a seat in a cozy Irish pub and you are sure to be surrounded by lots of fans cheering for their side. If you are rooting for the opposing side, just be sure to keep your cheers to yourself!

When Ireland is called upon to play a national squad for an international competition, it depends on the sport whether the players are from the entire island or separated by Northern Ireland and the Republic of Ireland. For Gaelic football, hurling and rugby union, players come from the whole island and represent Ireland. Football (soccer) is separated into Republic of Ireland and United Kingdom (of which Northern Ireland is a part). During the Olympics, athletes from Northern Ireland are given the choice whether they want to represent Ireland or the United Kingdom.

For a peek at what road bowling can look like, see this video. And get out of the way.