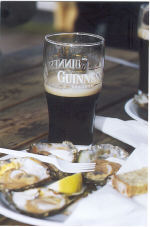 When you think of Galway, Ireland, what’s the first thing that comes to mind? Why, it’s oysters, of course! It’s not? Well, after you hear about the Galway International Oyster Festival you might change your mind.

First held in 1954, the Galway International Oyster Festival has been called “one of the 12 greatest shows on earth” by the Sunday Times and has also been named one of Europe’s best festivals in the past. It doesn’t take a genius to know what the focus of the festival is, but even if you’re not a fan of oysters, this is a festival that’s worth attending. In addition to local restaurants filling their menus with oyster-laden dishes there’s the requisite oyster-opening contests (both sponsored by Guinness) and a beauty pageant.

Back in 1953, a hotel manager called Brian Collins noticed that his hotel emptied out in September and set about devising a plan to make the tourist season stretch past the summer. He organized the first festival in 1954 – and 34 people came. He might never have guessed that his little festival would last so long, or grow so large, but in 2004 the Galway International Oyster Festival celebrated its 50th year, making it one of the world’s longest-running festivals. These days, thousands of people descend on Galway every September to take part in the festivities.

The Guinness World Oyster Opening Championships take place each year during the Galway Oyster Festival, with contestants from countries all over the world participating. In 2007, Sweden took home the trophy, with Ireland coming in only 5th. Another highlight of the festival is the Oyster Pearl competition, the Oyster Festival’s beauty pageant. The Oyster Pearl is a young lady from Galway who is chosen to represent the festival and the city for the next year. In addition to the tiara she gets to wear, the Oyster Pearl also gets (you guessed it) a string of pearls among other prizes.

For more information about the Galway International Oyster Festival, see the festival’s official website. If you’re planning to attend, mark your calendars for September, check the specific dates for the year and book your trip well in advance – this is a popular one.