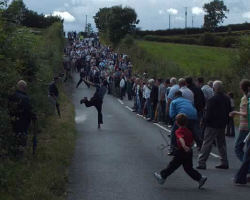 For most people, the idea of bowling as a spectator sport probably isn’t terribly exciting. Hanging out with friends of an evening at the bowling alley is one thing, but would you expect bowling to attract raucous crowds of thousands? No, you probably wouldn’t. But when you’re talking about Irish Road Bowling, that’s another matter entirely.

The sport of road bowling is most popular in County Armagh and County Cork in Ireland, although it was once also quite popular in Scotland and England. It has a long history, dating back to the 17th century according to some, so while it may look like semi-organized chaos it’s a popular sport in Ireland. The principle of the sport is similar to golf, in that a ball must be pushed along a course in the shortest number of moves, but the similarity ends there.

Irish road bowling is usually played between just two single opponents, although there are sometimes people who work as “scouts” ahead on the course. The courses can be up to four kilometers in length, and the roads being used are usually not blocked off during the game – so in addition to watching the ball, you’ve also got to watch for cars! The ball (sometimes called a “bowl” or a “bullet”) is 28 oz. of solid iron, and is hurled as far up the road course as the thrower can manage. The place where the ball stops is marked on the road with chalk, and that becomes the starting point for the next throw.

Sometimes, in addition to the thrower, there is another person on that team working ahead of the thrower on the course, acting as a point of reference for the thrower to aim the ball at. There also may be someone who stays with the thrower, helping to strategize the best move. The winner is whoever gets to the finish line with the least number of throws.

Like many sports in Ireland, road bowling can attract quite a crowd – up to several thousand depending on the importance of the game – and the people just walk along the course with the throwers, placing bets as they go and cheering for their thrower. For a look at what Irish road bowling can look like, check out this video:

And lest you think it all looks like something the local police might shut down at any moment, you should know that if it weren’t all on the up and up, the sport probably wouldn’t hand out trophies like this to the year’s best players: 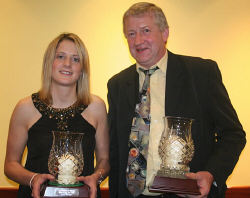