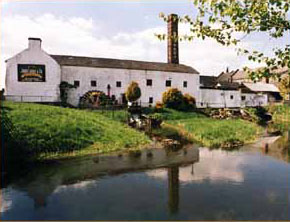 I can’t say enough about this place.

A lot of visitors to Ireland stop into the Jameson Distillery (where whiskey is no longer made) in Dublin. Some go down to Cork or up to Belfast to see the Middleton Distilleries (where whiskey is still made). Many people also drive from Dublin out to Galway and blow right past the best distillery tour in Ireland: Locke’s Distillery in Kilbeggan.

When prohibition came into fashion in the states, the Irish whiskey market felt its death knell. It had been battered for years, but ultimately what happened was, without demand and the economy in ruins, all of Ireland’s distillers went out of business and shut down their distilleries (except Middletons, which manufactured all Irish whiskey at one of its two plants until Cooley opened for business in 1987).

Kilbeggan is one of these places that died and was forgotten.

Its last batch of pot still whiskey sat untouched in barrels for decades until the 80s when an American bought and bottled it as a party favour to celebrate the purchase of his Irish castle (Knappogue Castle in Clare. And, by the way, one of those bottles is now worth thousands). The copper distilling urns were sold for scrap at some point during that time as well.

In the 1990s the town of Kilbeggan got together and, in an honest-to-God grassroots effort restored and opened up the doors of this mothballed distillery and turned it into the best damn whiskey museum I’ve ever seen. 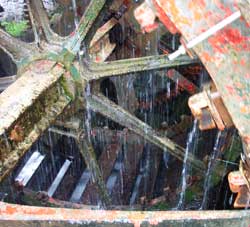 The great thing about Locke’s Distillery is that it remained practically untouched for so long. You really feel walking into the place that it looks pretty much the way it did when it closed its doors close to a century ago. The restoration effort was carried out by hand. The water wheel outside, dipping its planks into the Brosna river, drives huge iron cogs inside. Giant leather belts whir overhead and garganutuan pistons flex and pump in exactly the same way, drive by the same power they were all those years ago. The “modernised” hydrolic engine that was installed in the late 19th century is still here (in cases where the river froze or ebbed too low to drive the necessary automation), along with its THREE TON FLYWHEEL. There are huge millstones for grinding you can try your hand at turning to see how heavy they are. 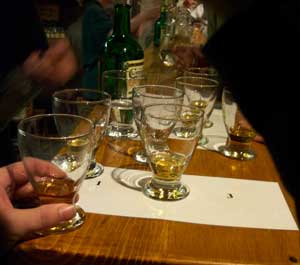 This place is SO cool. Vistors can wander freely through the place, looking into the massive mash tuns or the three-story wooden casks (no shit) that used to hold the whiskey at various stages of its production. This museum would NEVER fly in the states, as there are unobstructed views into those barells and bone-crushing moving parts within arms reach – it’s beautiful. They even still employ coopers to manufacture the barrels that are, yes, are still used to age their whiskey.

The advantage of taking the tour is the whiskey tasting test at the end of it. Volunteers are sought to try different whiskeys to see if they can identify one over another. There’s a small bottle shop and a restaurant and – seriously, this place rocks. If you like whiskey and you’re in Ireland, you owe it to yourself to stop in here.