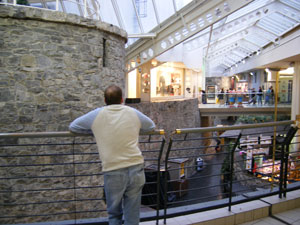 In today’s expanding Ireland where ancient sites are regularly paved over in the name of progress it’s nice to see some glaring exceptions.

In Galway, anyone building over a known historical site must both accept responsibility for maintaining the site and allow viewing access to the public. One of the more overt instances of this law is the huge Eyre Square shopping centre, built right over the old Galway town walls.

Rather than demolish them, the new shopping centre was built over them, like a giant warehouse. Shoppers entering the Eyre Square centre will stroll past modern glass storefronts and come face to face with the medieval entrance to the city: the old town walls, standing ancient and proud beneath the glass atrium.

The first time I brought some visitors to Galway and they came face to face with the walls inside the centre they actually thought the walls were fake – an exhibit built as a quirky addition to the place. The look on their face when I explained that those were the actual stone walls was priceless.