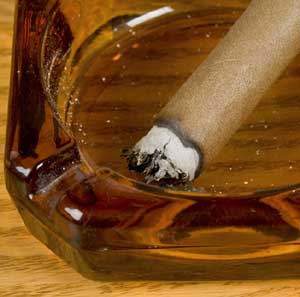 If you’re picturing the Irish pub as a fascinating, dark, smoky place then you’re one-third right.

Ireland passed a blanket ban on smoking back in 2004. Since then your Irish pub experience has been smoke-free. I won’t lie to you, there are cigarettes lit up when doors are locked – should that ever happen. Such things are mainly due to proprietors who smoke themselves, however.

The decision to ban smoking in Irish pubs was heralded by many at the time as the end of the Irish pub. Funny enough, it seemed to have little or no impact. Wellll- that’s not exactly true. Suddenly, just about every pub that could manage it set up an outdoor beer garden (where, being outside, smoking is legal). Most of these are covered affairs with either canvas or retractable roof panels installed.

In any case, the idiosyncratic and stubborn Irish people simply . . . stopped smoking in pubs. There were a handful of well-publicised (no pun intended there) holdouts, but even these died out after a number of months. Even with only a few smoking inspectors to cover all the pubs in the country, everyone just toed the line.

I have heard from local publicans that drink sales actually went up. It was supposed that this was due to smokers, who always used to have something to do with their hands, were drinking more quickly and ordering more pints instead of lighting up.

In any case, while our British and most other European neighbours still smoke freely in their pubs, the Irish are well ahead of the game with a smoke-free social environment. It is thought that, since it has been such a success in Ireland (where so many said it wouldn’t be), that similar laws will work well elsewhere in Europe.