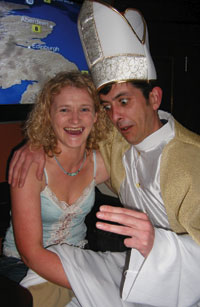 My bizarre weekend as social photographer came to an end on Saturday. Friday night was, as I mentioned in an earlier post a bit mad, if predictably so.

Saturday was a bit more, em, task-oriented. I headed across town; a man on a mission. I was determined to get in, get the photos I needed and get out. On the bridge came laughing a gaggle of women, one of them in a veil with a big “L” plate hanging around her neck – this would be a typical Irish bachelorette party (called a “hen night” here). I stopped and produced my camera.

“Hi, I’m taking photos for the paper – would ye like your photo in the paper?” I asked, thinking the laughing group of girls would make a pretty good photo. The bride-to-be stopped, eyeing me suspiciously and then burst into laughter.

“Yeah, right!” she declared and pushed past me with her laughing friends.

“You don’t work for the paper!” she called back at me defiantly, “L” placard flapping in the wind.

My evening was off to a great start.

From there it was off to Rayner’s for their Vicars and Tarts night. I’ll tell ya, the shhcandle. It would seem a singles group organised by anotherFriend.com had decided to make the bar their roost for the night, taking the Vicars and Tarts theme as far as they could. After snapping some great pics someone flashed their leather g-string a few too many times at me and I headed for the hills.

Popping into another local pub I was buffetted by noise and heat – this little corridor of a pub was freakin wedged and blaringly loud. Stripping off my heavy coat and wincing at the volume, I managed a few more photos before before fleeing up the road into the cosy environs of Flannery’s. 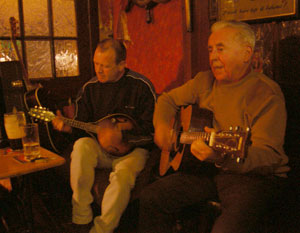 It was great to have a break from the madness. In here, people sat chatting and the intense vibe of the outside world fell away. It saddens me to think pubs like these are few and far between. Looking around, I decided I wouldn’t even bother troubling to ask these relaxed folks for a picture. As the musicians tuned up, I fervently wished I had the goatskin with me and could sit in and forget about the task at hand.

Deciding I’d earned a break, I ordered a pint which the owner, after asking about wifey and the munchkin, refused to let me pay for. Sitting down, I marvelled at the fabulous time capsule that is Flannery’s – great folks, chilled out atmosphere and live music. How could anyone prefer a sweaty nightclub over something like this?

Well, time marches on. I suppose tastes change and then change again. The main thing that frightens me is not so much that things are changing, but the way the Irish nightlife is starting to become just like everywhere else. It would be one thing if it was something relatively unique and still Irish, but it seems to me that the big cities of the world resemble each other more and more while the rest of the countryside become suburbs to them, absorbing the homogenised culture as it seeps outward into the hinterland.

At least here in the midlands there is still live music in just about every bar most nights of the week.

I sat down and drank my pint. As slowly as I sipped, eventually only the clear glass bottom bearded by a ring of foam was staring back at me. With a heavy sigh, I slipped my coat back on and slipped out of the quiet pub to complete my assigned task.