George Best is on the money 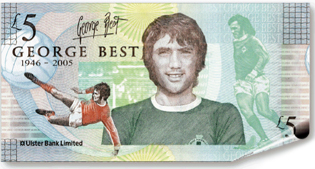 So the folks up north are issuing a five pound note with soccer legend George Best’s picture on it.

First off I need to state that I mean absolutely no disrespect to George Best here. Maybe it’s just my US upbringing, but isn’t money the province of presidents and history-altering figures? Does a sportsman really belong on money? Maybe it’s just me, but does a soccer player really function as a cornerstone of a nation’s identity? I mean, I know the brits (and hence the anglo-Irish) are mad for soccer, but aside from drunken celebrations and bragging rights, what do sports figures really do for a society? Their occupation is not a creative, but a competitive one; no matter what physical grace they may lend to their job. That’s the other thing: what they do is, at the end of the day, is play in a game – it just doesn’t seem a worthy independent contribution of genius to a nation’s cultural or political landscape; the sort of thing that would get a body onto a nation’s currency. 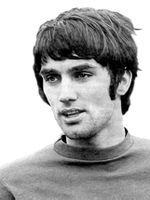 Did George do some astonishing charity work or help forge peace in Northern Ireland or something?

Am I alone here in thinking this is odd? Do other nations put sports heroes on their currency? I mean, why is he on their money? What ever happend to postage stamps? Statues? Naming of streets? Isn’t that where you find sports heroes?