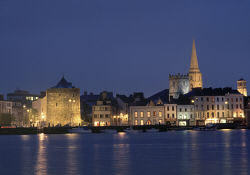 When certain people hear the word “Waterford,” they will no doubt immediately think of the incredibly high quality lead crystal which bears that name. But this city in Ireland is famous for more than just the crystal it produces, and in fact you can enjoy a visit to Waterford without ever having heard of the pretty cut glass.

Waterford is Ireland’s oldest city, having been first built by the Vikings in the early 10th century. Tthe city’s landmark building is also Ireland’s oldest urban civic building, Reginald’s Tower. Waterford is split by the River Suir, and was once one of the most important ports in Europe. In addition to the city’s fame in the glass-making department and its obvious attractions for history buffs, Waterford has a laid back feel which many travelers appreciate, not to mention lots of great Irish pubs.

Some of the things to do in Waterford are:

Although Waterford is easily explored on foot, do note that it is a hilly city so even though the distance covered may not be great you may very well get a bit tired from all the up and down climbing. The city has thoughtfully placed benches along many public routes, which are ideal places for sitting and catching your breath every now and again. Of course, the many pubs in Waterford are also perfect places to rest – because even if the weather is lovely and the bench looks inviting, you will not get the bench to serve you up a pint.