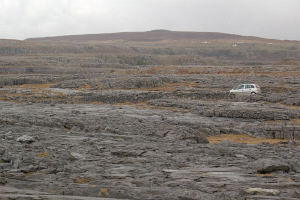 If you just caught a passing glimpse of The Burren in County Clare, you might wonder why anyone would call it a tourist destination. It’s a barren place, windswept and gray, that is famous for its unique rock formations. But it’s also got lots of historic sites contained within its borders, so The Burren makes an interesting stop for anyone in the area.

The Burren is quite large, actually, covering 250 square kilometers, and is roughly bordered by the County Clare villages of Ballyvaughan, Kinvara, Tubber, Corofin, Kilfenora and Lisdoonvarna. Among the historic and archaeological sites of importance in The Burren are tombs, burial chambers and a celtic high cross in Kilfenora. There is also the Corcomroe Abbey and a couple of well-preserved forts. The Abbey no longer has its roof, but otherwise is also well-preserved. It’s one of the most popular sights in the area.

One of the forts in The Burren is Caherconnell Stone Fort, which dates back to 500 A.D. and is one of the best-preserved stone ring forts in all of Ireland. There is a tour at the fort which will help you understand the historic importance of this site.

Perhaps the most famous part of The Burren are the Cliffs of Moher, which drop 214 meters (at their highest point) into the Atlantic Ocean. They’re singularly dramatic and picturesque, but – as with much of Ireland – the weather can be unpredictable and make you want to cut your visit short.

For an overview of the history of The Burren, make a stop at the Burren Display Centre in Kilfenora.