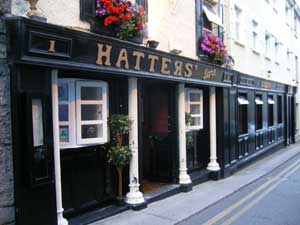 So the bean has been at me to get my poultry-loving butt down to Hatter’s in Athlone and try their duck. For the last few weeks he has been there at least one night a week scarfing down what he calls, “The best duck I’ve ever had in my life – ever.” Before he left for France for two weeks he fixed me with a stern look,

What could I do? It had been a while since I’d taken wifey out for a nice meal, so I made reservations and hoped for the best.

I have actually tried to eat in Hatter’s a few times, but it’s one of those places where you just can’t get a seat without a reservation – a fact that boded well for our experience.

The bistro itself is located in the town centre, half a block from the river’s edge and around the corner from the entrance to Gertie Brown’s pub. The pub and bistro are run by the same people and the wonderful interior of Gertie’s is repeated in Hatter’s. An intimate, wooden little bistro whose walls are cluttered with black and white photographs of old U.S. film stars (and the occasional musician – Elvis is up there). It’s a cosy, quaint, Irish environment. 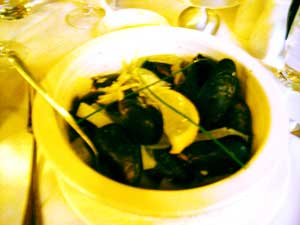 After waffling a bit, we decided to have starters after all. I had mussels (€8 – pictured, right) and wifey tried the deep-fried brie (€6.95). The sauce those mussels were in was A.Mazing. The pre-dinner bread (three different delicious kinds of seeded brown bread, I might add) was not nearly enough to sop up all the broth – something I desperately tried to do.

The deep-fried brie was served with some sort of raspberry syrup. It was both wifey and my first experience with deep-fried brie. I dunno if it was a bad example or if we just don’t like the stuff, but it was astonishingly bland and most of it went uneaten.

Wifey loved the fresh cajun sauce and thought her fish was quite tasty, if a little dry. 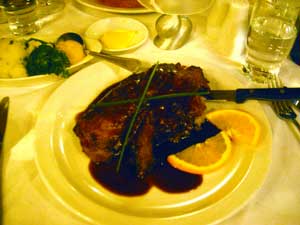 Now, thanks to the bean, I had huge expectation from this waterfowl. The last really good duck I had was right around the corner at Top Deck Bistro and it was pretty amazing (I really didn’t praise it enough in that review).

Hatter’s duck, I’m sorry to say, did not live up to the hype. It was attractively served, but from the first bite I knew I was to be disappointed. The outside was overdone, faintly charcoal-tasting and the meat itself was dry. That it was also a couple of euros more expensive than the duck right around the corner didn’t help. The accompanying stuffing was delicious, but also dry. I sadly tried to sop some moisture into the meat from the accompanying oranges and sauce. Unfortunately, coupled with the meat, the combination of double-dry duck and stuffing had me going through several glasses of water while I ate. I’m pretty sure I just caught them on a bad night, but more’s the pity.

Despite my disappointment with my main course, everything else about this restaurant makes it hard not to enjoy oneself. Wifey and I had a delightful meal and will definately give the place another shot.

In all, Hatter’s is a lovely little place and I would highly recommend it for a romantic dinner.