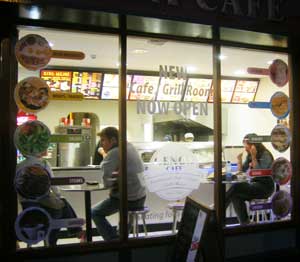 I mentioned the newly opened Genoa Cafe a couple of weeks ago, but I took the occasion the other day to actually stop in and give her a go.

Well, call me old-fashioned, but the new place just doesn’t FEEL the same. Admittedly, it’s good to have a chipper located so close to the middle of town otherwise desperate late-night munchers might have to resort to eating at the nearby Subway sandwiches (a grease-less option that would do little in the way of absorbing the alchohol in one’s stomach *grin*), but I miss the character of the old Genoa. Run-down as it was, it was different than other chippers in town. The new one . . . not so much.

I was mistaken in one aspect, apparently the back dining area still exists behind the high front counter; I assume it’s opened for lunchtime. Another big change – the staff are not Irish and there were about 5 or 6 of them on duty. It used to be just one or two girls working, even at the busiest of times. I’m pretty out of the loop, but I’m guessing that either Genoa is under new ownership or the old owners have leased the place to a new crowd. Another thing to miss, so: the late-night flippant banter of the local girls working at the place. Ah well.

I ordered a cheeseburger; it was okay. I’ll have to try their chips and see if they hold up to the once legendary Genoa chips . . .