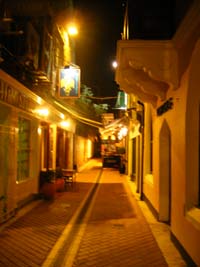 I’m always being asked if I miss the states. One of the things I miss the most is Mexican food. Imagine our relief (and mild trepidation) upon discovering Cafe Mexicana.

The restaurant is tucked away down on of Cork’s scenic alleyways. As we approached, I was amused to see an reclining mariachi sitting at the table out front in full mariachi garb.

“Buenas tardes,” I ventured. He lifted a surprised expression at me, eyes widening slightly as he noted the giggling munchkin strapped to my chest.

I gestured up at the sign. “Comida Mexicana?” A grin spread across his face,

I heard him chuckling to himself as I headed inside. 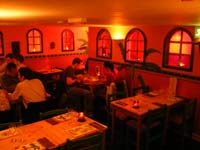 The interior is a colourful and whimsical set-up with painted walls and dimmed red-hued lighting. The food, I’m pleased to report, is quite tasty and not too far off from what you’d expect from a Mexican restaurant in the states. The prices, I’m sad to report, seemed a bit steep.

With relief, we ordered a round of Dos Equis(€4.70), some nachos(€6.00), guacamole & chips(€6.50) to share, a couple of fajita dishes(€18.90 each) and a burrito(€14.50). The first surprise was that our nachos & guac hors d’vours consisted of less than a dozen tortilla chips, quite insufficient for scooping the toppings. The second was that the burrito turned out to be something that more resembled an enchilada without salsa. The good news is that both were tasty. The fajitas were a relief to our Mexican-food-deprived palates and substantial enough to leave us more than full. Unfortunately, the fajitas were served with just three tortillas to share between the two – a parallel of the tortilla chips shortage.

Our Adanlucian waiter was prompt and attentive, seating us at a convenient table for munchkin placement. When he accidently ordered a beef (instead of chicken) fajita for the table, he apologised repeatedly, re-ordered the correct dish and immediately delivered another Dos Equis, gratis, to the waiting member of our group.

Also, there are no accommodations made for children at this restaurant. The munchkin was placed in the middle of the floor in her car seat, making it awkward for people walking by to get around her.

I once had an extremely bad experience with Mexican food in Ireland in The Alamo restaurant in Dublin’s Temple Bar area. In a bizarre incident of cross-cultural confusion, we read from the menu our order of “tortilla chips and guacamole.” The waitress informed us that they were out of guacamole. “Okay,” we said, “I guess we’ll just have salsa then.” “Salsa and chips is still good,” one of us commented. “Chips and salsa?” The waitress asked. “Yes, please.”

After the disappointing meal we realised that, in addition to the sub-standard and DEFINATELY NOT Mexican food we had consumed, we were never served our tortilla chips. Then we realised that there has been some french fries and spicy ketchup served with a burger one of us had ordered. The dawning realisation of what had gone awry with our “chips and salsa” order settled onto us.

I’m very pleased to report that “Cafe Mexicana,” was not a disappointment.