So we went for lunch in the River S in Athlone the other day.

The great thing about this bar is its location. At the site of what used to be (in the 1970s) the old Ritz Cinema, the River S bar and restaurant occupies what may be the best location in Athlone for a drink on a sunny day. 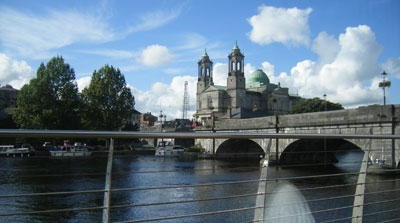 A very long, thin corridor of a place, the River S has massive windows and unmatched views of Athlone castle, Saints Peter and Paul’s Church and the town bridge. Outside and accessable directly by stair from the town bridge, there is a long wooden deck hanging a few scant feet above the waters of the river Shannon with tables for outside dining. On its third ownership since opening (it used to be called “West” originally), the River S has sought to attract clientelle with affordable pub grub and full rock bands at night.

On the down side, the layout of this pub is less than ideal. While quite large (it may have the longest bar in town), the layout of the bar is more like a corridor than a room, making it hard to hear music in the evenings (which is usually played down at the far end). It’s also on an incline, with four levels separated by stairs. There is a mechanical lift allowing wheelchair access from street to the bar level, but not to the bottom level near the windows or to the outside deck. We were travelling with a child in a stroller and needed two adults to lift the baby and stroller down each level.

The food was good, but were never approached for our order (we were one of maybe 6 tables there on a Sunday afternoon) and I had to make several trips between the bar and our table when it turned out that some items we were ordering from the menu weren’t available that day. I had the Cod, which was obviously fresh (not frozen) and better than your regular pub fare, the others in the group had paninis, which were tasty and served with chips/salad and at which, at €5.95, is a good bargain. The food was served promptly (possibly because we were the only table ordering food).

There seems to be some sort of Polish connection, as evidenced by the Polish soccer jerseys on the ceiling and a tri-colour with a tribute to two Polish players for Celtic.