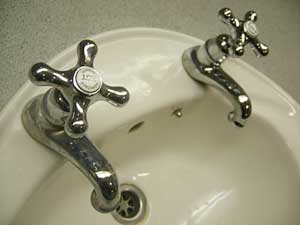 One of the wonderful, quaint little things you’ll probably notice on your visit to Ireland is the two separate taps on the sink.

This may seem charming and old-world, but for those of us used to adjustable water temperature in our lavatories, this is the bane of our existence.

It is just about impossible in Ireland to wash one’s hands – especially in winter – without nearly freezing or scalding oneself.

The alternative is plugging the sink and allowing the two taps to mix a nice pool acceptable-temperature water. Doing so, of course, sort of defeats the whole intention of using running water in the first place.

I had a local friend whose bedroom was against the bathroom wall. She was so irate at her foreign roommate who used to turn on the shower even in the middle of the night. For some reason she could not divine, this person would even wash their hands using the power shower. The power shower would buzz electronically whenever activated, disturbing her sleep – she was CERTAIN this was being done to purposefully aggravate her. The household was on the brink of a domestic explosion over this.

When she shared the story with me, I quickly offered an explanation: the foreign roommate was avoiding the freeze/scald scenario at the sink by using the built-in mixer present in the shower apparatus.

As it turns out, I was right.

Just to prepare those of you planning a trip to Ireland – do anything requiring partially heated water in the shower where such a thing is available to you.