Getting from Ireland to Scotland (and return) 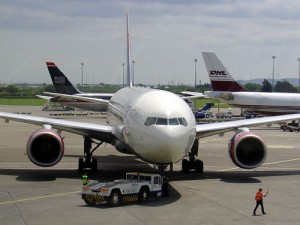 The quickest, cheapest and easiest way to get from Ireland to Scotland is by plane. Choose to fly from Dublin into either Edinburgh or Glasgow as the fares are the lowest. If you do not want to drive, plan to travel by train or bus, consider that you need to cross the sea and that involves a ferry crossing. Train passes are available and include a round trip ferry crossing but the cost is much higher than the airplane ticket.

Flights from Ireland to Scotland

There are four major airports to choose from when you need to fly out of Ireland.

Dublin Airport is the busiest airport in the country, served by plenty of low cost airlines. You can fly to Aberdeen on either Ryanair or Aer Lingus. The cheapest return fare starts at €80 per person (Ryanair). It’s much cheaper to fly into Edinburgh. Ryanair offers return flights from €46 per person. You can also fly into Glasgow, for return fares starting at €49 per person (on Ryanair).

Shannon Airport is located close to both Cork and Kerry. Unfortunately, there are no direct flights to any of the important airports in Scotland. But you can fly from Cork into Edinburgh but the fares are quite high. Aer Lingus offers flights from €106 return, per person. It’s slightly more expensive to fly into Glasgow (from €111 per person, return, on Aer Lingus). There aren’t any direct flights to Aberdeen or Inverness. There aren’t direct fights from Kerry into any of the major airports in Scotland.

Trains, ferries and buses from Ireland to Scotland

If you plan to travel by train from Ireland to Scotland, you should know that you’ll need to also take a ferry. So , first you need to book a ticket from your departure point in Ireland to either Belfast or Larne (in Northern Ireland).

From Belfast you can take the ferry to Cairnryan. This route is served by Stena Line and a single adult fare is £28. There are two departures daily.

From Larne you can take to the ferry to Troon. This route is served by P&O Ferries and a single adult fare is £28.

Also, you need to book a bus ticket from Cairnryan or a train ticket from Troon into the end point of your journey in Scotland.

You should consider getting a rail pass (combined) in order to save on train travel, as you’ll be traveling in Ireland and the UK. The BritRail Plus Ireland pass is a good option as it covers the British Isles and Ireland and includes a round-trip Stena Line ferry crossing between Wales or Scotland and Ireland.

Buses from Ireland to Scotland

If you want to travel by land and see, then another easy option to choose the bus. First, you need to buy a bus ticket from the departure point in Ireland to Belfast. Ulsterbus (operated by Translink) generally runs buses between major cities in Ireland and Belfast.

From Belfast, catch another bus to the destination in Scotland. The bus ticket includes the Belfast- Cairnryan ferry crossing. Buses are operated by Scottish City Link .

Driving from Ireland to Scotland

If you plan to rent a car (or take your own car) and travel to Scotland, you need to consider that you also need to take a ferry to cross the sea. This adds to the cost of transportation.

If you drive from Dublin to Edinburgh, you’ll take the ferry from Larne (Northern Ireland) to Troon (Scotland). P&O Ferries runs this route. A single adult fare is £28, while if you travel with the car, the price is £109 (a person and a small car). The total travel time is about 7 hours.

If you want to drive from Dublin to Glasgow, you’ll also take the ferry from Larne (Northern Ireland) to Troon (Scotland) and the total travel time is about 6 hours.