Flying to Ireland with an Infant 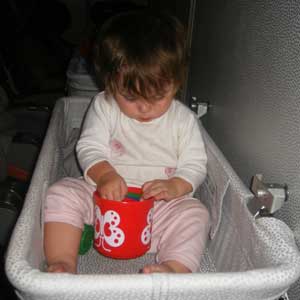 This is going to be an entry about babies and transatlantic flights.

You know that baby on the airplane? The one that just Won’t. Stop. Screaming. Hmm? This is every parent’s nightmare – for that to be YOUR child. Well, this last flight home from San Francisco to Dublin – poor little munchkin was THAT child. How did it happen? Well, I’ll get to that.

Her reaction was really distressing because the munchkin has done a lot of flying (especially for someone her age) and has never had a problem. At six weeks of age she flew to England. At three months her first transatlantic flight to New York. At 9 months it was France. This past February she flew home to San Francisco. Throughout all of these experiences she was manageable, if not a model of good behavior. So, two weeks ago we flew from Dublin to San Francisco again and she was an angel. An active, fidgety angel who didn’t sleep but one hour of our 13 hours in transit, but hey – for someone her age she was great. The way back – woah nelly.

Here’s what daddy did to prepare on the way back:

1. Booked a seat with a child’s cot in front of it (pictured above – Air France offers this on every international flight).

2. Pack loads of nappies (diapers), acoutrements, and a change of clothes for munchkin & daddy.

3. Pack lots of little finger snacks and a variety of interesting toys & books.

4. Dressed the munchkin in warm, comfortable clothes she could run or sleep in.

5. Make sure she had an active morning and lots of running around in the airport to burn off energy before boarding the plane.

6. Pack child’s chewable antihistamine to use an a tranquilizer should there be a repeat of the sleepless flight.

Now, grandma, in addition to having raised four children herself, is a antenatal nurse and lactation consultant with 40 years of experience – the antihistamine idea came from this font of knowledge and professional experience. Daddy HAD liquid child’s antihistamine on the way over (the flight where only one hour of sleep happened). Why did daddy not use it? It wasn’t for lack of trying – munchkin didn’t like the taste and wasn’t having any of it – diluted or otherwise. Hence the chewable kind one of munchkin’s aunties (also a mother of four) recommended.

Parents – and I cannot stress this enough – if you intend to drug your child to sleep on an airplane, try the chosen sedative a few days before your trip and READ THE PACKAGE CAREFULLY.

I took my sister’s suggestion blindly, assuming the chewable Benadryl would knock munchkin out. Not a chance. When she was tired and lying in her cot there was enough noise and bustle on the plane that she kept sitting up instead of drifting off. The first half tablet seemed to have no effect. If anything she seemed more alert 45 minutes later. I gave her the second half of the tablet.

After an hour or so of this the mother beside me pretty much forced her assistance upon me (but in a nice way). She had no more luck than I. It was during this brief respite from holding or chasing the munchkin that I read the back of the package and saw it. Right below the “Causes drowsiness” were the words:

May cause excitability in some children.

Sweet, cherished and blessed saints in heaven above preserve us. 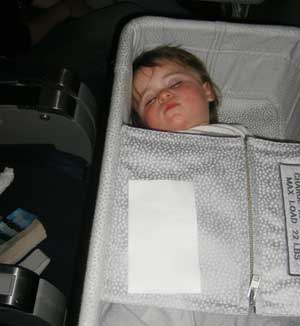 After almost 4 hours of her incredible, hyperactive misery the munchkin passed out – mid-cry, I might add – stone cold. The batteries had gone, the limbs went slack and daddy just about wept with relief.

I suspect many of the other passengers did as well.

It was then the airplane’s travel cot was a godsend. Now, the airplane travel cot has a zipped cover over the middle to hold your child in place, but should turbulence occur the airline staff will encourage you to wake your infant and seatbelt him or her to yourself. When I say “encourage,” I mean two or three of them will come over and tell you your child in is mortal peril if you do not wake them up and transfer them to your lap.

I’ll tell you folks, both the muchkin and daddy would have been in mortal peril if I’d managed to wake her and she started up again.

Thank the powers that be the rest of the flight was smooth because there was no way in hell I was going to let that happen.

I don’t know who was happier to see mommy in Dublin airport – the munchkin or her poor, bedraggled father.