Famous Irish Foods: What to Eat in Ireland

Warm fare, excellent drinks, and freshness form the base of Irish food. While most think of Ireland as a meat and potatoes country, there’s much more to Irish cuisine than that (although the meat and potatoes dishes are excellent). On a trip to Ireland, you won’t go hungry and you won’t have to spend a whole lot if you check out pubs, local markets, and take-away restaurants. If you’re looking for fine dining, modern Irish restaurants in cities like Dublin and Galway where traditional Irish dishes are served with a contemporary twist fit the bill. 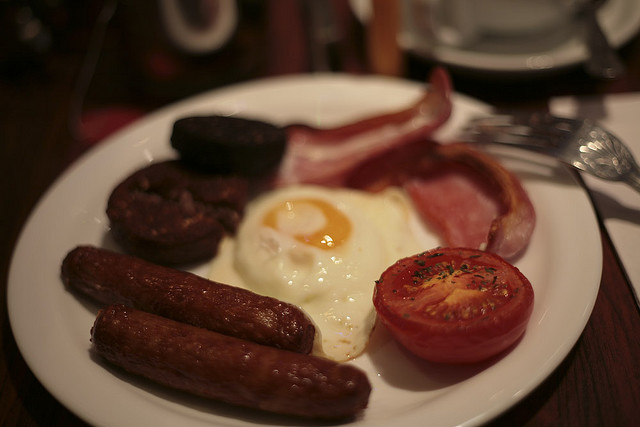 A full Irish breakfast is a meal so hearty you’ll barely need to eat again all day. The full breakfast generally includes bacon, black pudding, sausages, eggs, stewed tomatoes, mushrooms, and toast accompanied by condiments like brown sauce and jam. Depending on where you are in Ireland, breakfast could also include white pudding, baked beans, or fried potatoes. The main breakfast plate may also be preceded or followed by fruit and cold cereal or porridge. 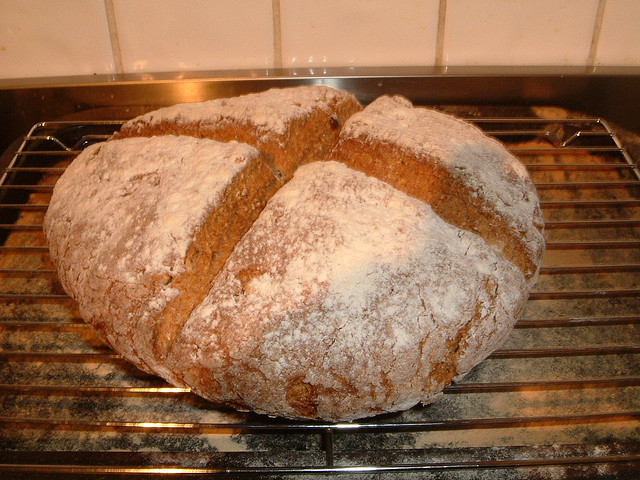 A simple bread made only of flour, buttermilk, baking soda, and salt, Irish soda bread is a staple perfect for covering with butter and jam or dipping in lamb stew. Although you’ll find many types of soda bread today studded with raisins or dried fruits, these are considered cakes in Ireland, not soda bread. The only variation in true soda bread is whether it’s made with wheat flour or white flour. You’ll find it served alongside any stew, at breakfast, and with many other meals in Ireland. 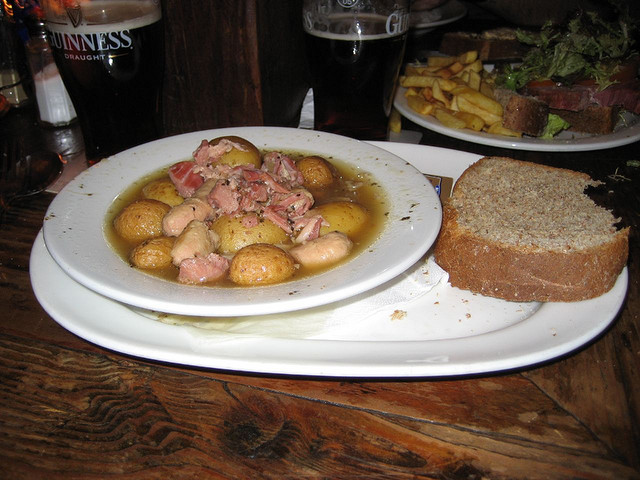 Meaty and warm this rustic dish is perfect for fighting damp, chilly days. Sausages, potatoes, bacon, and root veggies are cooked low and slow in a light broth with a few herbs. Often served with soda bread on the side, coddle is comfort food at it’s simplest and best. 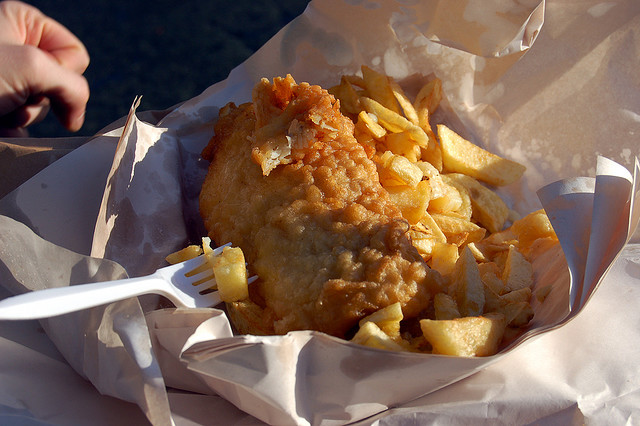 Thick pieces of flaky, fresh fish battered and deep fried served with chips/fries to go on paper smell of salt and the sea. Sprinkle a little malt vinegar over both and you’ve got authentic fish and chips. Many pubs serve it more formally on a plate, too, but the best places are usually take-aways. In Dublin, you’ll find plenty of take-aways open late for a midnight snack. 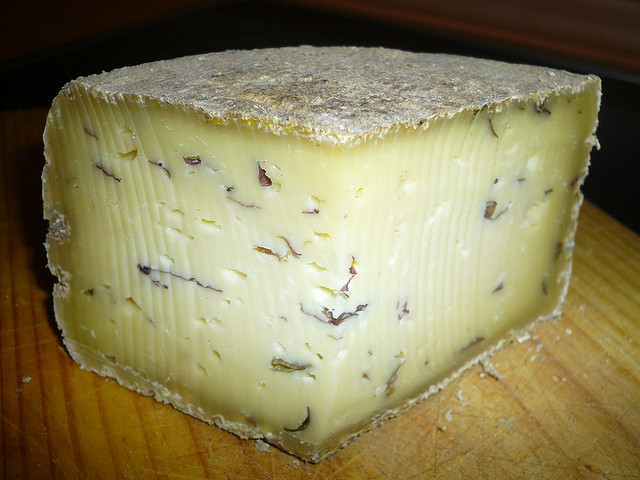 Handmade, artisan cheeses from sheep’s milk, cows’ milk, and goat milk are an Irish specialty. As much of the country is agricultural, seeking out these cheeses is easy to do. Head to local markets, delis, farms, and grocery stores to find great cheeses to try like Irish cheddar or blue. Pair them with some beer and soda bread and you’ve got a perfect picnic. 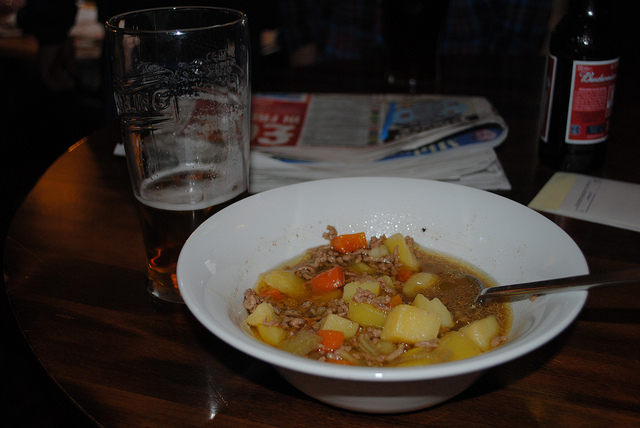 At it’s most basic, Irish stew is lamb (often extraneous bits like shank and neck) and potatoes boiled slowly with whatever other ingredients one has on hand like carrots, onions, and barley. Today you’ll find many versions all over the country. Many pubs add Guinness to their stew recipes for a little extra richness. You’ll find Irish stew made with beef and full of other veggies like mushrooms. An authentic Irish stew can be just about anything as long as it’s warm, filling, and cooked slow. 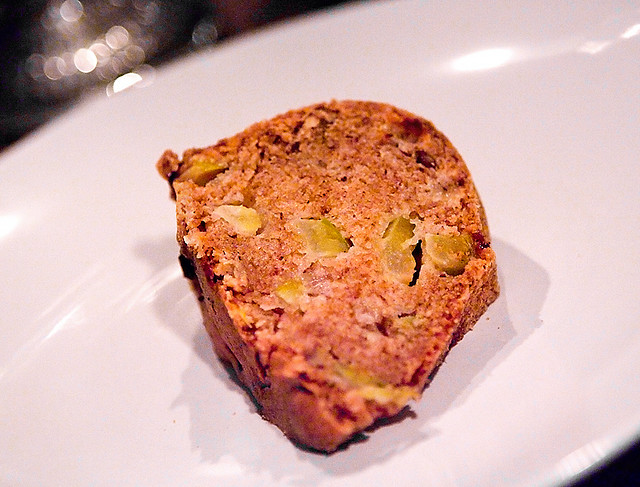 With all the heavy, delicious food in Ireland you might find it tough to save room for dessert, but try to hold out for a slice of Irish apple cake. Spiced with cinnamon, topped with ice cream or caramel sauce, flavored with a little local whiskey…every Irish baker has a favorite apple cake recipe. It’s often on the dessert menus at pubs or you can grab a slice from a bakery.

When most people think of Irish beer, the first word that usually comes to mind is Guinness. The black, smooth stout is as iconic as the shamrock (but much tastier). One could easily drink nothing but Guinness Stout on a trip to Ireland and be perfectly satisfied. But if you did, you’d be missing out on the many other good Irish beers out there. Smithwick’s Draught, an Irish red ale brewed in Klikenny, and Kilkenny Cream Ale, which shares similarities with Smithwick’s Draught and Guinness Stout, are two national beers that showcase the flavor of Ireland. Many local and microbreweries are also popping up throughout the country. For a taste of something sweet, you’ll also find cider on tap in many pubs.