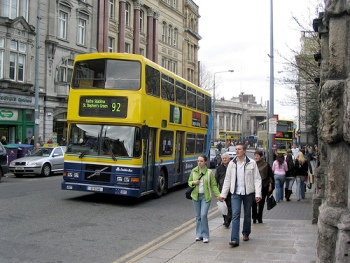 With an efficient public transport system, visiting Ireland on budget is definitely possible. Most travelers prefer to travel by bus, although flying is not very expensive either (particularly thanks to the two major low-cost carriers serving the area: Ryanair and Aer Lingus ).

Ireland’s bus network is fast, efficient and very well-connected. Traveling by bus in Ireland is one of the cheapest ways to explore the country and move from one city to another. The ride is comfortable as the buses aren’t crowded and the roads are in good condition.

Getting to/from Ireland by Bus – From another Country

Definitely the cheapest way to get to Ireland from another country and vice versa is by bus. It’s cheaper than traveling by train.

Eurolines operates services to/from Great Britain. You can book the tickets directly on the company’s website.

The rest of Europe

Getting around Ireland by Bus – From one City to Another

There are both public and private companies which offer a lot of connections between the cities, as well as to/from the major airports. Thanks to the many options, the rates are really low.

Getting around Ireland by Bus – Within a City

An extensive bus network operated by the stated-controlled Dublin Bus offers excellent connections within the city of Dublin . Fares can be paid directly to the driver. There are both day time and night time buses.

As for the other major cities – Cork, Limerick and Galway – , these are easily tackle on foot and there really isn’t a need for a bus network.

>>read more about Transportation in Ireland