Tour of Ireland in Athlone 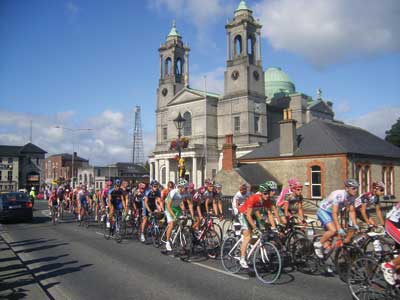 So Sunday was the final leg of the Tour of Ireland bicycle race.

Just lookit ’em all there, bicycling over the River Shannon, past Athlone’s Saints Peter and Paul’s church.

The munchkin and I got up early on the beautiful, sunny day (finally!) and strolled over to where booming voices were announcing things in Burgess Park. There was quite a set-up in the park, with tented structures and loads of journalists, motorcyclists and event-sponsored cars with bikes on their roofs.

“The Tour de France has nothing on this Tour of Ireland . . .”

An annoying Guy-Smiley announcer voice was booming over the river as we approached the park. Despite his uber-American Troy McClure-style voice, I suppose he may have been right in his assessment. I immediately forgave his cheesiness when I saw his co-announcer had one-upped him. He was Troy McClure’s British twin and seemed to have walked out of a 1920s barbershop quartet – blue, pin-striped sport coat over an Hawaiian shirt with obligatory straw boater’s hat. Wow. Is this what happens to aging bicyclists, or are these just the only guys they could find to announce things?

In any case, I was admiring the Tour of Ireland logo posted everywhere – it really is a fantastic piece of corporate logo art. Well done, whoever did that. 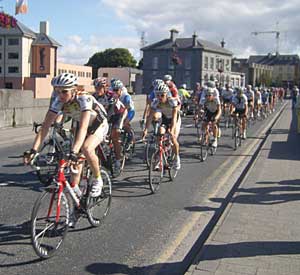 There was an unfortunately small local turn-out. Most of the locals I met along my walk were asking what was going on in the park. In fairness, there was NO local advertising for the event. The only sign was the one I posted before stating in small, black letters on a yellow background that there would be traffic disruptions on Sunday.

Munchkin and I returned to the other side of the river for mass. The priest, determined to catch the race, finished with mass in 20 minutes flat. That must be some kind of record. The congregation flooded out onto the steps of the church just in time to see the police escort come flashing past on their motorcycles, followed by support cars, photographers on more motorcycles and then, finally, the competitors trailing their pace car.

Again, locals were stopping on the road, confused and bewildered as to what was going on. Yes, as dozens of international sport photo journalists milled about and even a video cameraman circled above from a helicoptor, most of Athlone had no idea Ireland’s first world-class bike race was passing through town.