The Rock of Cashel

A bristling fist of stone rising strikingly from the surrounding plains, the Rock of Cashel is one of Ireland’s most distinctive landmarks.

One of the ancient celtic strongholds, Cashel rivaled Tara for a good portion of Irish history. Highly defensible, built as it is on a remarkable limestone plateau, it appears suddenly from the motorway as you approach the town of Cashel. Access is from the opposite side, though the exact route is badly signposted. Park below in the car park and walk up to the reception area where €4.95 lets you into the site. Wander freely or join the guided tour; the choice is left to you.

Cashel is a collection of structures built during different historical periods. 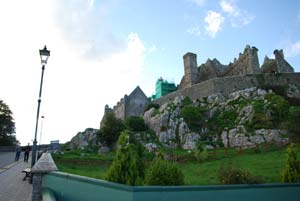 Like all of Ireland’s ancient structures, it has weathered several invasions, most recently the destructive Cromwellian forces, and is a good deal worse for the wear. There is an intact round tower (with its cap still on) at one corner, and a roofless, but impressive cathedral occupying the centre. A good deal of the most recent structures were, unfortunately, crafted with soft, local sandstone and have not weathered the years well.

The grounds at the top are covered with graves. For years, locals buried their dead here. As our tourguide said, “Don’t worry about walking on the graves, I assure you that every inch of ground up here has been used as a grave – you are walking on bodies.” The practice of burying bodies on the rock of cashel has always been a tricky one, as much of the ground is solid limestone. Nevertheless, a small handful of families still have the right to bury their dead on the rock, passed down from generations, so there are a number of fresh graves among the ancient tombstones.

The view from the rock is truly spectacular, stretching for miles toward the horizon; that alone is reason for a visit. The ruins are probably some of the more impressive in Ireland, made even more so for their unique locale.