Last night I went to my first match in Athlone Town Soccer Stadium to see the Irish under-19 team play the Chilean under-19 team in an international friendly match. 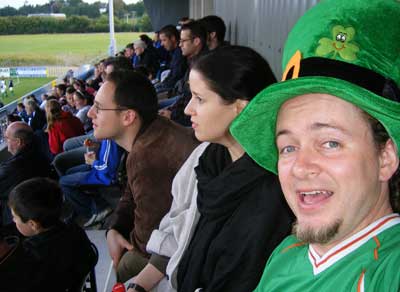 And yes, I wore the Irish jersey and a big foam hat.

Hey – what’s the point in being a yank if you can’t be obnoxious in public every once in a while?

It was a good match – some impressive plays and a bit of excitement. This was the second in two games played at the stadium – only opened this year. Ireland took Tuesday’s game 2-1, but I’m sorry to say the tables were reversed this time around – Chile won 2-1 with two demoralizing goals in the second half that happened within 5 minutes of each other. Ouch.

There were some pretty exciting moments on the pitch though. Tempers flared over a foul in the second half; players had to be separated and one of the Chilean coaches got ejected for mouthing off. Hey – what’s a european soccer match without the threat of violence? 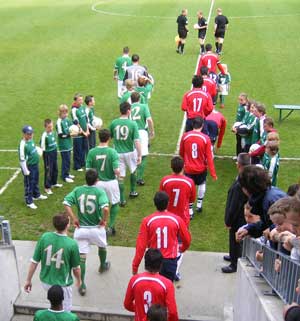 I was disappointed to find there wasn’t a local Athlone player on the Irish team, but I’d imagine there’s a lot of competition for those spots. I didn’t see any Damien Duffs or Roy Keans on the pitch, but there was some pretty good work done by a number of Irish players – the Irish goal in the first half was a beautiful bit of teamwork between no 7 and 17.

I believe this was wifey’s first soccer match. She discovered there is no alchohol for sale during the game (although there is a small room selling bottles of beer after the game), but there were some hot dogs and chips for sale from a little port-a-kitchen kind of affair. Having just eaten prior to the match we didn’t get to find out what Irish soccer stadium hotdogs taste like.

In all, a great night out. We’ll definitely have to do it again.