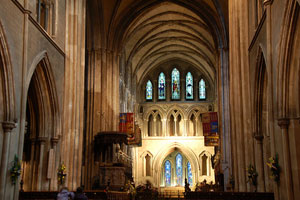 Looking for the best attractions in Dublin? Look no more because here’s a list of some of the best Dublin attractions that you should not miss visiting during your trip to this beautiful city.

This college was formerly exclusive to the elite society of Ireland and yet now it is open to everybody. Trinity College was founded by Queen Elizabeth in the year 1852 and some of its popular graduates include Samuel Beckett and Oliver Goldsmith. The main attractions in the college are the Book of Kells and the Old Library.

Guinness Storehouse is in the heartland of the factory complex of Guinness. This fantastic visitor location makes an interesting story of the family of Arthur Guinness. It houses a Gravity Bar, which has a complimentary tipple to visitors.

This cathedral is by tradition the location of the holy well utilized by St. Patrick for baptisms during the late 5th century.

The show at Dublinia includes the early history of Dublin from the influx of Anglo-Normans in the year 1170 up to the disestablishments of monastery in the year 1540. Most of the exhibits are reconstructions, videos and models that are wearing the clothes of the period. The first floor contain a significant model of the city about 1500, a showcase of artifacts from Wood Quay and the ship reconstruction of Viking.

The castle is situated in the Dublin’s oldest place- the Christ Church. The first castle was constructed by King of England, John as a reinforced defensive building and it was regarded as the mark of British ruling in Ireland. Dublin Castle is a national attraction and serves as a venue for concert events and EU conferences.

Situated on the edge of the city, Kilmainham Gaol is where you can find the origins and history of Ireland. It was in this place where James Connolly, Patrick Pearse, and other 1916 Rising leaders were put to death.

Located in the center of Dublin, Temple Bar is regarded as the cultural quarter of Dublin. Some of the finest restaurants, shops and nightspots of Dublin are found in this tight, cobbled lane running in between the Christ Church Cathedral and the Bank of Ireland.

This cathedral is considered as one of the earliest medieval churches in the country. The Christ Church Cathedral serves as the home to tomb of Richard de Clare, also known as Strongbow who directed the Norman attack to Ireland. The church also has a huge crypt where travelers could see abundant features of historical facts.