This is one of those grand old ruins you find almost everywhere in Ireland.

Just next to the river in Athenry town, County Galway are these noble old priory ruins. While one can read the plaques or take a tour to discover the priory was founded in 1241 AD for the Dominicans, making it the first of its kind in Connacht, the abbey has a lesser known significance: Ireland’s first university.

I was snapping photos of the attractive ruins when a gentleman in a tie approached me and asked, “Are you all right?”

“Certainly,” I replied. “Are the ruins closed?” 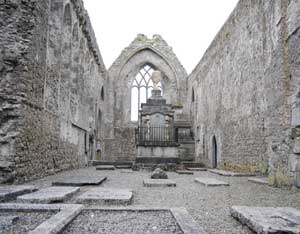 “No, no – not at all.” said he, breezing past on his way to visit a grave. I snapped a few more photos and the man returned, again making a beeline for me. He stopped alongside me and began to expound upon the Priory’s history in a manner that bespoke either great personal or professional attachment.

As it turns out, I had chanced to meet Seamus, Athenry native and local tour guide. It was he who told me how the priory came to be ruined and how it was a greater shame than one might imagine.

As I said, the Priory was Ireland’s first university. In 1644 it was opened and students came from near and far to attend. The great tragedy is that less than a decade later, in 1652, Oliver Cromwell arrived, the destruction and slaughter of Ireland his business. He destroyed the priory, ejected and murdered the Dominican friars and then, knowing it would be a great insult, turned the grounds into his horse stables so that his animals could soil and desecrate what was once a place of learning and prayer.