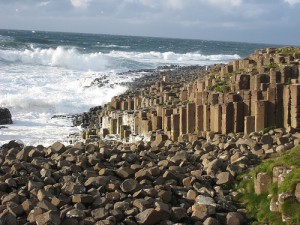 Northern Ireland (also known as Ulster) is located on the island of Ireland and is part of the United Kingdom. Despite its reputation of being a violent place, the political situation has stabilized and it’s safe to travel here. Northern Ireland offers a variety of things to see and do: from stunning landscapes to vibrant cities and historical landmarks.

Northern Ireland is located in the north east part of the island of Ireland. To the south and west , it shares a border with the Republic of Ireland.

Northern Ireland comprises six counties of Ulster, which was one of the four ancient Irish provinces:

How to get to

Belfast International Airport (BFS) is the most important international gateway into Northern Ireland. Aside from the domestic flights , it also receives flights from various large European airports and from the USA. Some of the airlines operating here are: Aer Lingus, bmibaby, Continental Airlines, easyJet , Jet2 and WizzAir.

Belfast is the center of the road network. Although there are only three motorways in Northern Ireland, the other roads are very well maintained. There are good connections both within Northern Ireland and to the Republic of Ireland.

There are frequent ferries across the Irish Sea, which connect Northern Ireland to Great Britain.

Northern Ireland has a temperate maritime climate and is wetter in the west than in the east. Although the seasons are distinct, they are less pronounced than in the rest of Europe and the weather is unpredictable year round.

If you want some adventure, than make sure to head to the Mourne Mountains. They are a walker’s paradise , where trails take you past rivers, lakes and woodland. It is also possible to rock climb.

Rent a car and head to Causeway Coast (the North Coast). It offers some of the best scenery in Europe. The rugged coastline meets some romantic landscape along the way , not to mention the waterfalls, the castles and the interesting ruins you will encounter. Giant’s Causeway is located here as well, with its hexagonal basalt columns and tales of ancient Irish giants.