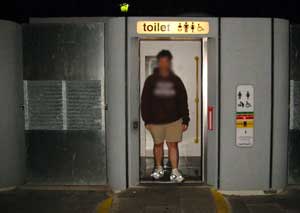 This is pretty awful. Some poor sap was having digestive issues and rushed into a pay toilet in Galway. After 10 minutes the door popped open, exposing him to the folks in the street. He had to pull up his pants (pretty much ensuring he’d need a new pair) and go outside to put more change in the machine to continue his business.

Subsequent attempts to get Galway City council to extend the automatic toilet’s time to longer than 10 minutes failed, with the council expressing that the 10-minute time limit was “a security feature” that prevented “antisocial behavior.”

What could be more antisocial than running around halfway through your business with your pants around your ankles?