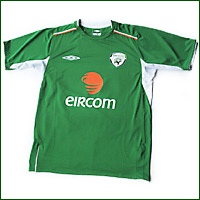 On one hand, Ireland are at the top of their group in the World Cup Qualifying matches. They have 4 consecutive victories so far in their attempt for World Cup qualification (a feat never before accomplished in Irish soccer history). They have also played the very first two soccer matches ever in the Irish Sport mecca – Croke Park – and brought victory home for the local crowd (71,297 of them at today’s match).

So why does the World Cup Blog have hardly a mention of the game?

How about this – San Marino, the team of thanks-for-the-match-I-have-to-be-back-at-my-real-job-at-9am-tomorrow Ireland BARELY beat was just tromped by Wales 3-0. Wales, you’ll remember was the other lackluster team Ireland should have beaten much more decisively than they did last week.

Ireland has a coach no one seems to have any faith in, a line-up nobody seems impressed by and their current standing in their group is mostly due to the fact that they’ve been playing the worst teams in their group and are two games ahead of everyone else.

Buuuuuut, I have to say I much preferred this evening’s Irish team over the one that played Wales. While they kind of lost steam for a majority of the second half, giving Slovakia get numerous opportunities on goal, I saw an echo in their playing this evening of the 2002 Irish World Cup team who could maintain possession of the ball for 60-80% of most matches. Sure, they still don’t have a striker among them, but hey – Damien Duff is pure magic and there were some great moments with McGeady and Hunt that quickened the pulse.

I wish I could point to an article on the worldcupblog.com for ya – but aside from an aside here and a pic on the mainpage . . .

As you can see, sportsfans, not everyone is convinced by our Irish team.