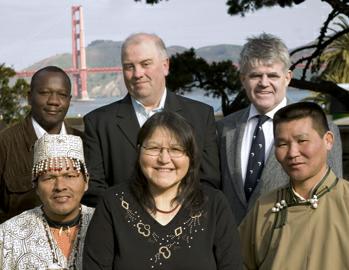 I’ll tell ya, there’s something special about San Francisco and Ireland this week.

Willie Corduff of the Rossport Five was one of the six recipients of the Goldman Environmental prize Monday in San Francisco for stopping Shell Oil from running an illegal gas pipeline through his field in County Mayo. Willie, you’ll recall, spent 94 days in prison over this. The prize is the world’s largest grassroots environmental prize.

Willie’s sixth of the €92,000 prize money must present a small, but rewarding moral jingle in his pocket. Willie intends to spend the money on supporting the Shell to Sea campaign. Better yet, the award will hopefully bring more international attention to the struggle in Mayo which is still ongoing.

Richard Goldman (the prize’s founder) had this to say,

“This year’s Prize recipients have succeeded in combating some of the most important environmental challenges we face today. Their commitment in the face of great personal risk inspires us all to think more critically about what ordinary people can do to make a difference.”

Regarding the award, Willie Corduff, father of six, had this to say to the Irish Times,

“It isn’t about the money, it is about our health and safety and that of our children,”

“The bottom line is we will not lie down. We can not. There is too much at stake. We’d have to leave our homes if we were to accept this. We have to protect ourselves, because no one else will.”

As of last August, Shell agreed to re-route its pipeline, but is not considering building an offshore refinery, which is what the Shell to Sea campaign is asking. In October they broke ground on their refinery in Mayo near Rossport, despite protests. While they haven’t released their new plans for the pipeline, it can’t have changed much, the ongoing building of the refinery demonstrates that clearly enough. State-supplied police guard the site against daily protesters.

What’s worse is that Ireland granted all rights to the oil field to Shell oil company , meaning none of the €60 billion profit on the Irish gas will go to Ireland in the form of taxes or otherwise. Neither will Ireland pay any less for the gas they use from the find, what could amount to 60% of all gas used in Ireland (currently Ireland gets 85% of its gas from the UK).