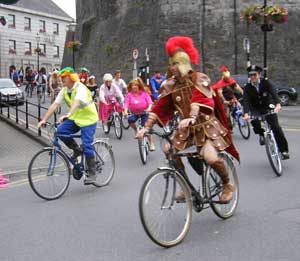 But I thought they stopped at Hadrian’s Wall?”

Yes, yes they did. What you see depicted there to my left are some of the costumed riders involved in Athlone’s Nuts About Chernobyl Charity ride. Athlone has some strong ties with the Russian community of Chernobyl, raising funds and sending people over at least once a year to build houses, work with children and assist in the area.

The name of the ride comes from Nut’s Corner, a pub that is involved heavily in the project every year and at which the ride begins.