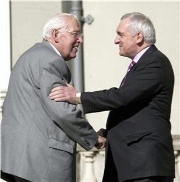 People, I want you to take a very good look at that photo there.

For our friends stateside who aren’t certain what this handshake means . . . .welcome to the crowd.

That’s Bertie Ahern, the Irish Taoiseach, shaking hands with Ian Paisley, the guy up in Northern Ireland whose stance, as it was explained to me at least, was “Ireland? What’s that?”

With staunch political supporters resigning around him right and left, the leader of the DUP (those are the Northern-Ireland-Belongs-to-Britain guys) has come down to Dublin to meet with the Irish government for the first time. This follows talks between Mr Paisley there and Gerry Adams of Sinn Fein (those are the Northern-Ireland-is-still-Ireland guys) concerning the creation of a government (still under British rule, in case anyone is confused here) that includes members of both parties.

Yes, that’s right – there was no Irish representation in Northern Irish politics until now. Obviously, Sinn Fein is celebrating its cross-border presence at the moment, one of the only tangible unities between Ireland and Northern Ireland. Well, I mean, aside from the fact that it’s the same island and all – but you knew that part. ANYway, personally I’m not sure what the DUP is celebrating other than the fact that they aren’t going to lose their jobs. But maybe that’s enough. Hey, if this means less dead people, than that’s good news for everyone, right?

Well, whatever it means, it probably means that my very intelligent and workable “trench” solution will not be adopted.