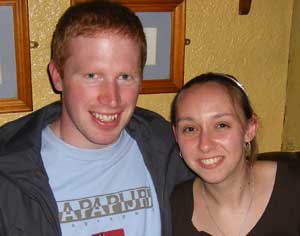 For the first time in ages I almost didn’t attend this week’s Shack Session.

There I was, lying on the couch after a good feed feeling exhausted from early mornings and lack of sleep. It wasn’t that I forced myself to go, it wasn’t that I convinced myself it would be worth it – it was like someone told me I should. Never one to ignore such whisperings, I reluctantly gathered up the instruments and wifey obligingly provided a lift out.

It was looking a bit bleak at first, what with just me and the instruments on the bench and not a sign of anyone else.

A fellow from the states approached me, explained that he was stationed in Ireland working on the power plants and had heard about the session via the internet. Within short order the sheriff and rodrigo showed up, followed by ze germanz. Prior to an early departure, our yankee friend gave us some Steve Earl and Grateful Dead. It’s been aaaages since anyone played a Dead song in my presence (though it must be said that the bean whipped one out some months ago). In any case, it was a bit of flashback to stateside life.

There were some lovely moments with rodrigo (who has expressed an aversion to having his songs posted online in case you’re wondering why I don’t post a sample here), and the sheriff pulled out one of his originals I hadn’t heard for a while thusly.

In any case, I completely neglected to produce the aul camera during the session so it was Mr Adrian of the newspaper article on this blog fame who gets his photo snapped as we were leaving. Just lookit ‘im there with his main squeeze – awww, ain’t they cute?