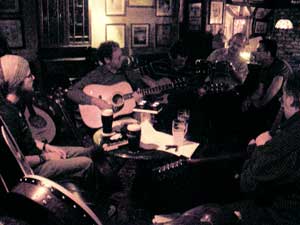 This Tuesday was my first Shack session in about a month. I think I had bowed out from exhaustion a month ago. Then wifey was sick and then i was stateside for two weeks.

Again, it’s nice to return and find some things waiting for your return. The bean and I made an early foray out shackwase with our instruments and sat discussing the nature of guitar woods and musical pursuits. I had brought the aul Guild & bodhrán along and the bean had his bouzouki and Taylor on board. We were just pints away from perfect contentment.

Ze germanz showed up next with his bass, but it was a little while before des appeared with the fingerpicker hot on his heels. Our English fingerstyle player was in attendance and when the sheriff appeared, the group only needed bongos to show up, which he did near the end of things, setting up his percussion off to the side.

A number of friendly onlisteners (hey, you can say “onlookers,” can’t ya?) gathered at the periphery and a jolly session ensued with players obviously keen to blow off a bit of steam and play and sing a few tunes. It’s always a treat when des gives us a song, but this week he pulled out one that had everyone singing and playing along, thusly.