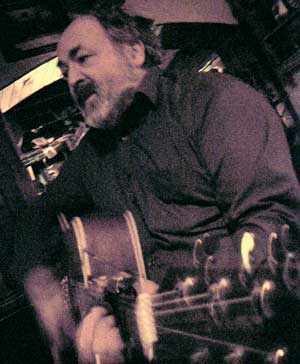 This past Tuesday was the Shack session.

Folks, I have to say this feckin cold is really starting to annoy me. You’d think I’d be missing more sessions, wouldn’t you? In any case, what with the bean up bobbing on the waves and ze germanz contemplating paternal matters, it was myself, des, the sherrif, hardy and B in keeping the fire lit.

This one is one of the sherrif’s relatively new ones – check out the change in there, folks! Ahhhhllll riiight!

What with the songwriter night looming near, I’ve been fielding a lot of questions lately about sessions, music and songwriting. It’s sessions like there where it all starts, folks. Back in the bay area it was the open mic scene (and there has been talk recently of setting up an open mic in Athlone), but here in Ireland it’s these informal sessions where new songs first see the light of day. What a great thing that there is still so much interest in these sessions, both in the way of participants and folks who just want to relax and listen for an evening.