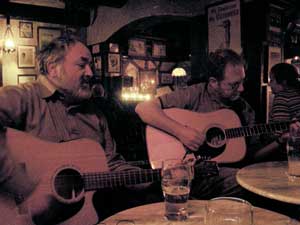 If I thought I was coming down with something on Monday, Tuesday confirmed it.

I had no less than three phone calls during the day about the Shack Session that night. Supposedly, three folks from out of town had heard about our humble gathering and intended to stick the head in and were looking forward to meeting me.

As it turned out, I met none of them.

Ze germanz and my stuffy-headed, extremely reluctant self headed shackwase early and over a few pints of water discussed the upcoming songwriters night.

Within a few minutes, Kuch and the midwife arrived with the Sherrif and Des hot on their heels. I stayed for a few tunes before excusing myself quite abruptly during one of the sherrif’s numbers (sorry!). I had an anxious wifey outside waiting to collect my infected self and decided to high-tail it while I could.

I had stayed long enough to hear the sherrif to play one of the fabulous lullabies he wrote for his kids though – that’s a great tune, actually. Also, since I was there and my sinus infection had lowered my voice about 2 full steps into a very satisfying baritone (in my addled state I believed that I sounded like James Earl Jones), I tried my hand at this John Hiatt tune without a capo. I’d normally sing this one on the third fret – just listen to that stuffy, but solid, low ‘E’ note there. Alllriiight. I should get sick more often!