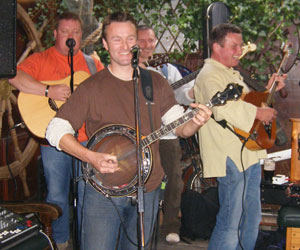 One of my initial firsthand impressions of Ireland and her music scene was attending some Fabulous Bonker Boys shows.

The Fabulous Bonker Boys are a collection of frighteningly talented, hard-playing, hard-drinking Irish musicians covering a range of Celtic music with rock ‘n roll sensibilities. Not the sort of band you want to meet in a dark alley, the Bonker Boys are fronted by the powerful, bullhorn-voiced Jock whose head is overflowing with everything from traditional ballads to Thin Lizzy.

Making no apologies, The Bonker Boys’ music consists of flawless harmonies, articulate, layered instrumentation and driving rhythms. Guitar, mandolin, banjo, bouzouki, electric bass and (often) drumkit. Sadly, these guys have never put a tape of their stuff together and while they used to be flat out gigging a number of years ago their shows are currently few and far between.

I caught them playing Sean’s Bar at the Murphy’s and Oyster festival and captured one of their tunes thusly.