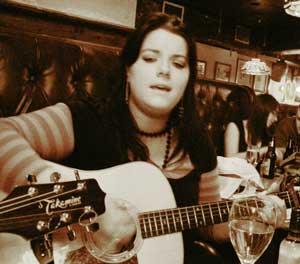 Last night was the release night for the 2006 Songwriters CD and The Shack was the place to be.

We had all but two of our songwriters with us on the night, plus the regular Tuesday crew. A few members of the press were even in attendance. The music flowed fast and furious and I sold out of all but 11 of the CDs I had brought along to the night – a good sign for this year’s disc!

I headed down early, stopping in at Alfredos for some filthy chips and a 10″ pizza on the way. Just as I arrived, the bean pulled into the car park. Grinning, he emerged from his newly acquired vehicular transportation, “I thought you said you were leaving at 7.30pm?” 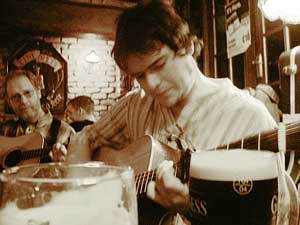 I stuck a few posters up around the place and settled in the back of the pub for a change. I also pulled a few extra chair around in a circle – I figured the night’s attendance might be larger than normal and we’d need the space. As it turned out, I was right.

Soon the place was buzzing and chairs were at a premium. The usual suspects arrived, led by the Sherrif. Ze germanz, hardy, des, VE, the new guy, bongos, pads and Makewait even showed up (although they politley declined treating us with a performance).

It wasn’t long until “Team Mullingar” (as the bean dubbed them) arrived and gave us some splendid songs. The first of which was Fiacra giving us this rendition of Pete Courtney’s Please Somebody, which I was delighted to chime in on.

Just about everybody got their two cents in, the whole crew joining in on such tunes as aint no sunshine. Near the end of the night with the proprietor of The Shack sitting on a nearby table enquiring as to whether any of us had homes, Deborah Jane gave us this lovely medley.

That last one is well worth a listen all the way through, lads.

Many thanks to all who showed up and sang or played along. What a great night.