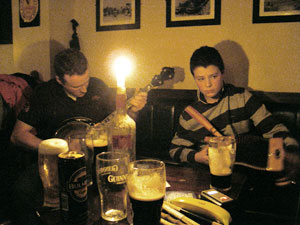 You’ll recall the posting on Sean’s Bar this week. Well, a good chunk of the crowd from earlier in the afternoon drifted across town to the Shine’s session.

Starting this week, the Shine’s session has moved up from 10 to 8pm. The bar was wedged. I have to say, I think the earlier timeslot suits the session much better. There’s no one who wants to be up late on a Sunday night, but when there’s a good session on sometimes the next thing you know you’re getting to bed at 1am on Monday morning. I, for one, am thrilled it’s been moved up.

We had a couple of exceptionally able box players at the table, they were a real joy to behold. The first of which was a buachailleen of just 10 years of age – the gossen played like he had at least another ten years under his belt on that thing. He should be a force to be reckoned with when he comes of age. Check him out here.

I really enjoyed this particular piece as well – a real cracker by one of the new whistle players who drifted over from the earlier session in Seans.